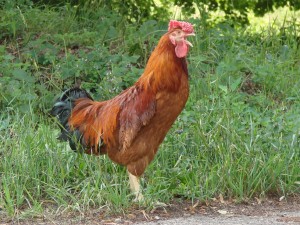 Close approximation of one of the backyard chickens.

People who live in Washington, D.C. have this annoying habit of thinking that anything outside of Washington, D.C. is “the country”—as if civilization stops at the diamond-shaped border. We live about 30 minutes outside of Washington, but are routinely told that it’s hard to make it to our events, because they are “so far away” and that we live in the “boonies!” In fact, in August, we held a family reunion in Arlington, Virginia, which is about 10 minutes away from Washington, and were asked why we chose such a “difficult location to find.”

Recently, Pilar, the kids, and I went over to a relative’s house who recently moved Maryland. They live exactly 4.4 miles outside of the limits of the District of Columbia, in a mature suburban area with a lot of 1950s houses built for the World War II generation to raise the Baby Boomers. The neighborhood looks like it suffered a bit in the 1980s and 1990s, but now appears to be improving dramatically, with many houses undergoing renovations and landscaping. It looks like a great area for our family members to raise their children.

Upon arriving at the house, our cousin hastily rushed to the back, however. “I need to secure the chickens.”

Yes, they have chickens in their backyard. Apparently, they really do consider anything outside of Washington to be the country, because there were about ten of these birds walking around the backyard! Valentina, who has a minor obsession with chicken cartoons, was enthralled seeing chickens in real life up close. The twins thought it was cool, too.

Over the course of the afternoon, I asked a few questions about their newfound agrarian lifestyle. Apparently, the chickens hopped the fence one day, and landed in the neighbor’s yard. He came over, and apparently, the conversation went like this:

Neighbor: “I am a police officer. You are not allowed to have chickens in this city.”

Our Relative: “You are not a police officer. Get out of here.”

The man left, and a few hours later, his elderly mother came over and apologized for her son’s behavior…

Another time, the next door neighbor came over and knocked.

“Hey man, I just want to let you know, I just bought a dog, so if your chicken hops my fence and gets eaten, it’s not on me, ok?”

Our cousins have brought new life into this suburban community!

We returned home after a pleasant afternoon spent socializing and eating (what else? chicken sandwiches, of course—but the chicken came from the store, not the “egg-laying pets”) with a few gifted eggs. Pilar has been on a “farm fresh” kick for awhile now, so her cousin thought she would enjoy the eggs. Instead, she thought they looked weird.

As she sat down to eat with Veronica this morning, Veronica asked her mom, “are these from…the chickens?”

Pilar didn’t want to admit that she felt the same way. I started making fun of her, at which point she responded.

“Well, I’m just not used to getting to know the chicken personally beforehand.”

Indeed, I suppose it’s all what you are used to. For instance, I am no longer surprised to go to someone’s suburban home and find chickens in the backyard.