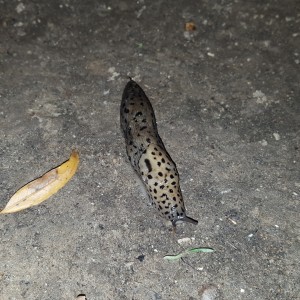 A Slug Outside Our Home

The town we live in here in Virginia is a planned community, and there are many wooded areas interspersed throughout the community. These wooded areas are great during the summer, when one can take advantage of the many shaded walkways and bike paths to get outdoors while not being scorched. There is, however, a certain downside to living around so many trees and so much greenery: the high number of slugs which come out at night!

Previously, I lived in Raleigh, North Carolina, where I occasionally saw slugs, but nowhere near as many or as frequently as here in Northern Virginia. When it’s humid, it seems like slugs materialize out of thin air. I don’t find slugs particularly repulsive like some people do; it’s just that I don’t want to accidentally step on one and squish it, which means I have to gingerly navigate, almost on my tippy toes, around some parts of the path leading up to our house.

One day, I received a call that Pilar and the kids were coming home, and having just arrived myself, I knew there was a slug right on the front step. I didn’t want anyone to step on it and kill it, or risk slipping and hurting himself. For this reason, I went outside, looked for a stick, and began to scoot the slimy, shell-less snail over to the side. At this moment, I heard a concerned voice say, “OH NO!”

It was our neighbor Nora, who had a look of extreme worry on her face. “You can’t touch those! THEY WILL SUCK YOUR BLOOD!!!” she explained.

“They don’t suck blood,” I replied.

“Well, in Honduras, they say that…”

No! That dreaded introduction! Words which I have grown to fear! Words which signify the beginning of a discussion, or rather a diatribe, which will inevitably center around the proud pontification and stubborn reportage of various “true facts” that have been passed down for generations! From our previous encounters, I know that no amount of explanation with books, websites, or videos will be able to override or contradict the truisms introduced via that magical evocation of the Motherland, and Pilar has told me repeatedly to just let it go…

Oh, I could stop here, and just smile, or reply with a noncommittal acknowledgement of sorts, but I’m a stubborn, borderline OCD, mostly-German white guy hailing from the Midwestern United States, originally. I don’t always have to be right, contrary to what some have said about me; however, I just can’t sit by idly while factually-incorrect things are presented as truth! It’s just too painful! At this point, I decide to figure out why Nora thinks that slugs suck blood. After a bit of back-and-forth and cross-examination, I realize that she thinks slugs are leeches.

Alright, fair enough; leeches can spread disease and if you hail from a poor country, it’s understandable that people are cautious about blood-sucking, disease-spreading worms that leave bruises, scabs, or infections. I get that. So I try to explain that slugs are most certainly not leeches, nor do they suck blood, or even bite. About the only thing they can do is infect you with salmonella, but most people don’t go about licking their fingers after handling a slug. Not having any idea how to say leech or slug in Spanish, I went to my trusty web browser and opened up SpanishDict.com and got down to the bottom of things. A slug is a babosa, while a leech is a sanguijuela.

Unfortunately, a mere dictionary consultation alone didn’t do the trick, so I brought up Wikipedia in Spanish. Nora seemed to be accepting what I was showing her, although for the next few days she would randomly start talking about leeches again and start shaking a bit, and telling me she couldn’t believe I got near one (with a stick, mind you). Yet this would not be the end of our sluggish dialogue.

A few rains later, a group of slugs emerged from their subterranean hideouts, and one got on Nora’s watermelon which she had temporarily left outside, while another started crawling up the door, at which point Nora came in the house mildly shrieking and asking me to please move the slugs. “So, you aren’t afraid to open the door, but I still have to remove it?” I asked. She reasoned that it might crawl up the door frame, wait for her to come back out, and then drop on her hair. Fine. I moved the slugs.

Finally, during yet another slug manifestation, Nora began to bring up how deadly and blood-sucking slugs are again, and I about lost it. Being a guy, I walked over to the nearest specimen, picked it up, and started to approach Nora—to show her they are harmless, I assure you—at which point she began to tell me, “well, in Honduras, they say that…”

I put the slug back down, smiled, and walked into the house, without saying another word.

3 comments on “Attack of the Killer Slugs”