90% of the time, I am rather serious; so serious, in fact, that I tend towards anxiety when things don’t go according to plan or there are too many unknown variables. But every once and awhile, I go to the opposite extreme, and just let loose. There definitely is a kid inside me, and sometimes, I enjoy expressing myself in a silly way. 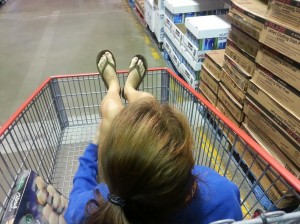 My Stepdaughter Riding in the Cart

Siria is Pilar’s oldest daughter. She’s sixteen years old, and I’m really proud of her. She does cheerleading at school, is on a traveling soccer team, works a part-time job, and does pretty well in school. This year, she’s been assigned one day a week to cook, and is learning new recipes and expanding her culinary horizons. She has other chores to do around the house, and most of the time, she does them relatively well for a teenager.

Every once and awhile, I go out with Siria to a store, the mall, or other places. On the way there and back, we often chat about life, what’s concerning her, what music is good, and the like. Sometimes she shares things with me that she wouldn’t feel comfortable sharing with others, because as she puts it, “I have to admit…you do give good advice.” I feel honored that she feels that way, because it is hard on a teenage girl to have a new guy move in to the house. In the early days, there definitely were some arguments, but over time, she accepted me and has been kind towards me, which I appreciate.

Siria is at that age where she looks like a young adult, can drive, has a job, and is mostly responsible for herself…but sometimes she still wants to let her inner kid out. Today we went to Costco, and she told me she was tired from her cheerleading practice. She asked if I would push her around in the cart. For a minute, I thought, what the hell?! but decided that I would just go with the flow. Siria has no problem doing what she wants boldly, and doesn’t care what others think, while I am almost paralyzed at times by others’ opinions of me.

So here is this thirty-something white guy with a scraggly beard, slightly overweight, pushing around a teenage Hispanic girl who is in good shape and is texting on her phone nonstop. Believe me, I got looks. I shrugged my shoulders at a few of the people, and smiled at others. Siria was oblivious to the reaction, as she was too busy texting away.

I took a photo and a video of the experience, and showed it to Pilar when I got home. She found it mildly amusing (I am very careful to always share whatever experiences I have with Siria with her mother, for propriety’s sake). While Siria was acting silly, and definitely not according to social norms, I appreciated the opportunity to have a little fun and let loose, given that most of my time is spent being serious, fretting, and working hard. I’m thankful that I have a good relationship with my stepdaughter (don’t you fear, traditional types; boundaries are clear, and I do expect respect for my position), and that we have fun together, even if it is often silly.

2 comments on “My Silly Teenage Stepdaughter”