On Fridays, I take my baby Valentina to a babysitter in the neighborhood. She’s a nice Bolivian lady whom we’ll refer to as M.E. on the blog in any future posts. After handing over Valentina (who now has started exhibiting some separation anxiety), I turned around, and froze like a deer in headlights.

The Google Maps car parked in my neighborhood.

The Google Maps car. And I don’t look good.

I almost never go out in public in shorts. I hate shorts. I have pasty white legs, and a beer belly. The shorts make it more obvious. But I was late to the babysitter, and ran out of the house with Valentina. My hair was messed up. And I had on random t-shirt.

But now I will be immortalized on the Internet, looking like a bum. 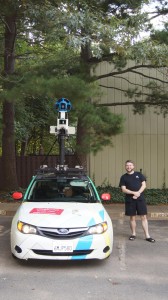 Anastasio with the Google Maps car.

Oh well, I thought to myself. Let’s seize the day and turn this into something fun, now that I am ruined. I saw him going in the direction of my house, and then stop for a break. Neighbors started coming out of their homes to see what was going on, chat with the driver, and take selfies. My phone battery was almost dead, so I couldn’t take photos, but I had my DSLR camera handy and got two pics. The driver indicated he was going to my street next, so I ran home, put on my nice clothes (i.e. my El Salvador football jersey featured in this site’s banner) and waited for him.

I video recorded his arrival for posterity, and posed with a manufactured wave and a smile outside our home. I told Pilar playfully that she’ll have to stay with me forever now, because I’m the face of her home on Google Maps! Suddenly, though, the driver stops the car and motions at me.

“Do you know where the nearest gas station is?” he asks.

Without thinking, I tell him, but then look at his huge laptop with a map on it and think, You’re the Google Maps guy. Don’t you know that already?!