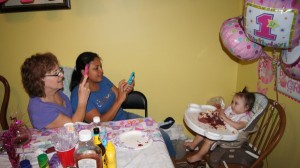 Mom and Nora Doting Over Valentina

Mom came to stay with us in June for a month, and she’s back for another month in September. She’s developed a great friendship with one of the people who rents from us, Nora. There’s just one problem.

To understand how I can make the claim that they are now great friends despite not having a common tongue, let’s take a step back and talk about how people acquire language.

When I was young and only spoke English, I wondered how children learn another language without the benefits of someone showing them all the words, dictionaries, grammatical explanations, and the like. The idea that if you were around a language long enough, and just tried to pick it up, it would come to you didn’t make sense, even though I trusted people who said that’s how it works. Sure, if you don’t use books or have a teacher of some sorts, it’s going to take a lot longer, and you probably won’t ever be great at the language, but you will be able to communicate eventually.

When two people who speak different languages need to communicate, they start by pointing, making facial signs, and using their own word for something and saying it over and over until the other person either gets it, gives up, or pretends to get it and smiles. Eventually, both people learn a little bit about the other language, and insert those words into their own language. My mom now calls a baby bottle a “pacha” (the Central American word for it).

They also will tend to change the pronunciation of their own language to a way that the person in the other language will understand more easily. Case in point: I hear my mom say to Nora: “Tooooooooos-dehhhhhh” for Tuesday. Nora refers to lunch as “lonche” after having worked with Hispanic people in America, instead of saying the proper Spanish word “almuerzo.”

Nora is a sweet lady who is not trained in linguistics, so I ask her about this to see how she perceives it. “In Honduras, we say ‘almuerzo,’ but when I came here, all the Spanish people were saying ‘lonche’ and I didn’t understand why, but I just started saying it because they did,” she remarks.

What is happening in these cases is that a “pidgin language” is developing: a way that people who don’t share one language can communicate. Sometimes pidgin languages are temporary and die out, whereas other times, they become permanent, at which point they are identified as Creoles. Haitians speak a Creole language based off French. Even Modern English is technically a Creole language based off of the blending of Old English (a German language) with French after the Norman conquests (that’s why we don’t eat pig. We eat pork. We don’t eat cow. We eat beef. When it grew up in the field, they called it by the Old English word, and when they handed it over to the noble to eat, they used the French word).

So now, after two months of my mom being around, she and Nora have become great friends. They now speak a common language, understood mostly just by them, but it still is a language all the same.