On Saturday, we celebrated our daughter Valentina’s first birthday. We live in a townhouse, so it can be hard to have a lot of people at one time, but I got excited and invited 70 people anyway. I did the invitation on Facebook only and a week and a half before the event, so by Friday night, only 12 people had replied that they were coming. Still, knowing how people are, I was concerned that a large number of people would materialize who had not RSVPed! I issued a last-ditch attempt to get yes/no commitments, which only resulted in two people marking themselves as “maybe.” Really?! I thought. (If one of those two people are reading this, I still love you!) 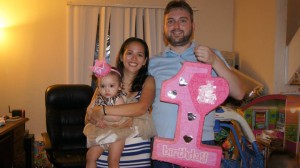 My mom is staying with us right now, and she asked what time the guests were going to arrive. I replied, “the White people are going to arrive at 3 pm, and the Hispanic people at 5 or 6.” At first, she thought I was joking, because she is not familiar with “Spanish time,” so I had to explain that notions of time vary from culture to culture. I remember when I was 15, I showed up at my friend’s Quinceañera on time. Being a modern Peruvian, my friend Caro had a party in her house and didn’t wear a pink dress (this was twenty years ago, before it was common for people to wear different colors), and so when her favorite Gringo friend showed up, her mom sat me on the couch and handed me the TV remote control. An hour or so later, people started showing up, and my friend emerged. When my father came to pick me up at something like 10 or 11 pm, I was the first to leave!

As it happened, we had a third variable for this event…our Greek-Albanian compadres (κουμπάροι in Greek). There is no word for this in English, although the word compadre might sound familiar to people who watch Western movies, where it is thrown around as a synonym for friend or partner. It actually is a term that means the parents of one’s godchild. The role exists in both the Roman Catholic and Orthodox Churches, and as such, both Spanish and Greek have a word for it. At any rate, Valentina’s godparents are our compadres/koumbari.

Greeks and Albanians also tend to arrive “late” to events, but their “lateness” is nowhere as extreme as Hispanics’. As such, we ended up having three “shifts” of the party:

It actually worked out well, because we were able to focus on each group and give them individual attention. While I’m a big fan of cultural mixing and interaction (and such did end up occurring, especially since one of our Caucasian friends is a member of the Orthodox Church and knows Valentina’s godparents, and the godparents met some of Pilar’s family before leaving), given the small townhouse where we live, it was good that not everyone showed up at the same time. Toward the end of the night, the house was full and the temperature was rising fast as the kids did the piñata and folks began to dance. We were all sweating and running into each other. Finally, I cooked over 15 pounds of flank steak, 6 pounds of pork, hamburgers, and hot dogs, and being able to cook in shifts saved me from going crazy!

Notions of time vary from culture to culture, and taking that in to account can make it really convenient to fit a lot of people into your small townhouse by taking advantage of shift scheduling. If you haven’t tried this technique before, I highly recommend it!