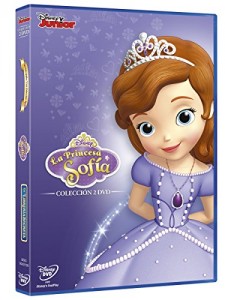 As anyone who knows me personally knows, I am obsessive about making sure that my daughter Valentina only speak Spanish with me and her mother at home, because I want her to be fully bilingual [1]. Since English is the dominate language here, everything is a “threat” to her continuing to speak Spanish. For instance, when kids come to Valentina’s daycare who are primarily English-speaking, Valentina comes home speaking English and it’s a struggle to get her to speak Spanish again (but I prevail, through a combination of games, pretending I don’t speak English, encouragement, and sometimes correction). I have to work hard at maintaining Spanish, something I may write more about in a future post. [2]

At any rate, she recently became obsessed with the TV show Sofia the First. Well, that program is only available on Netflix in English (many programs are available in Spanish on Netflix actually, so if you want to have your child watch Spanish programming, it’s definitely an option. If you don’t know how to do it, let me know and I will walk you through it. Maybe I will make a post about it).

In just 2-3 weeks of watching that show every day, her (attempted) English usage went up like 300% It’s crazy how one program can have such an effect on a kid. That has other implications, I might add, but let’s stick to the language issue here. At any rate, I tried to legally obtain the program in Spanish, to no avail as it is not available in the US in Spanish (you can order it in PAL format from Spain, but then I would have to go through a laborious process of converting it on my multi-system DVD computer DVD player). So I went the questionable route and got a bootleg copy of the pilot episode in Spanish.

Thankfully, Valentina likes the episode and has watched it several times in the last few days, and has started using words from the show in her daily speech. Disaster averted. For now!

[1] Normally, in order to raise a bilingual child, one parent would speak the first language while the other parent would speak the second. It would be natural for me to speak English and Pilar to speak Spanish, but due to Pilar being quite accustomed to code-switching (mixing the two languages together), her other children can understand Spanish but they don’t necessarily speak it as well. As such, I choose to speak only Spanish to Valentina, with her mother speaking mostly Spanish, and her siblings speaking English. [2] If you would like advice on how to raise a bilingual child, I highly recommend the book Raising a Bilingual Child. Ordering it through this link helps support the blog and my writing, so please do so!